The History Of The Clumber Spaniel Club of America 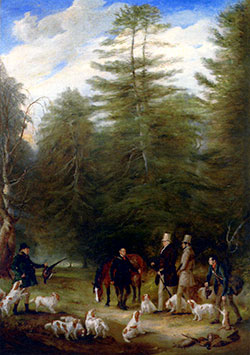 There being no chairs to be found, the meeting was conducted standing, so was short and sweet. According to my notes made at the time, there were present at this first meeting only seven persons. Three of us had just come out of the ring: Eunice Gies, Tom Rauch, and myself; plus Mary Costello, Rita Furey, and Harvey and Lois Gibson. In any case our little group of seven, presided by Eunice, quickly got down to business. No minutes to read and no treasurer’s report. Only three points were discussed: 1) NAME. Clumber Spaniel Club of America, or American Clumber Spaniel Club? We immediately decided on the first one, since the second one would have made it sound like we were trying to differentiate between Clumbers in our country and those of our cousins on the other side of the pond. 2) PRESIDENT. Immediately and unanimously we agreed on Eunice Gies. 3) BULLETIN. As Eunice pointed out, since by necessity we were to be a far-flung group, the main thing really to hold us together at first would be a Bulletin, and Mary Costello was volunteered to be the first editor.

In February 1972 at the Westminster Kennel Club dog show, seven devotees of the Clumber Spaniel met and the Clumber Spaniel Club of America was founded. Among those early members were Eunice Gies, Mary Costello, Ann Marion, and Rita Furey. A second meeting was held in May 1972, at the Trenton KC show. At that meeting the Constitution and By-Laws were approved. One of the Club’s first activities was to document those Clumbers that existed in the United States. By late May of that year, they had a list of 37 Clumbers, along with their sires and dams. Eunice Gies was the first President, and Mary Costello the first Secretary/Treasurer of the CSCA. Among those who were involved at the Club’s inception, and who may have been on the first Board, were Harvey and Lois Gibson, Wilton Meyer, Bill Ernst, Karen and Neal Johnson, Pat Petrone, Jack Patterson, Ann Marion. These were some, if not all, of the charter members. In the 25-year history of the Club there have been 12 Presidents and 5 Secretaries. Except for the Secretary and Treasurer, an officer or board member may hold only one position for a maximum of 3 years. All positions are voted on by the membership each year.

At the second meeting, in May 1972, a decision to hold the first B Match in August 1972, in conjunction with the Beaver Falls, PA and Canfield, OH, shows, was made. Jack Patterson hosted the match, Mercedes Brown was the Judge, Eunice Gies was the chairperson, and Ann Marion was trophy chair. AKC refused to recognize the match, so it was conducted as a fun match. The first sanctioned B Match was held at the Gies home (summer of 1973) with an entry of 13. By 1975 the membership had grown to 42 members. After the AKC refused approval for an A Match, second and third B Matches were held in 1975 in California, and in 1976 in New Jersey. An AKC sanctioned A Match was finally held in 1977 in Michigan.

The first AKC sanctioned National Specialty was held on Friday, August 18, 1978 in Ann Arbor, Michigan. Sunny Dutton judged 39 Clumbers (40 were entered). This first National was dedicated to the memory of Ann Marion. The National Specialty rotates annually, from the East Coast of the U.S. to the Central region of the country and to the West Coast. The make-up of the regions is such that they will be as equal in membership population as possible. Geographic size is not the determining factor. This gives all members a chance to host a show. In 1981, the first Puppy Sweepstakes was held with an entry of 5. In 1988, the first Obedience Trial with an entry of 12, in 5 different classes, was held.

In 1991 was the first Tracking test, and TDX was added in 1995. The CSCA became a member club of the AKC in 1989. In 1990, the CSCA board of directors appointed Ricky Blackman as our first American Kennel Club Delegate. The largest entry at a National Specialty is this year, our 25th anniversary show with 147 Clumbers and a total of 228 entries. The National Specialty now offers its members and friends a variety of activities and fun. Along with conformation judging, these activities include Hunting and Tracking tests, Obedience trials, Sweepstakes, Informational and/or Fun Seminars, Canine Good Citizen tests, Annual General meeting, and a Banquet and Awards night. These are followed by two and occasionally three all-breed trailer shows for those who wish to attend. The Club has an impressive list of trophies that are awarded in conjunction with the National, both for people and dogs.

The CSCA, along with the English and Swedish Clumber Clubs, has been holding International Seminars every three years. This started in England in 1987, went to the U.S. in 1990, to Sweden in 1993, and back to England in 1996. These seminars are in each country.

The CSCA has grown in membership to more than 400 as of May 1997. The majority of the members are “Companion Pet Owners”, the most important segment of any club. Many members volunteer their time and energy , working hard in every capacity to further the betterment of the Breed and the Club.

The Club encourages the x-raying of hips (OFA) and the checking of eyes (CERF) for all Clumbers and especially the breeding stock. As of May 1997 we have a total of 83 OFA Clumbers and more than 300 Clumbers CERF’ed.

There is an estimated population of 2000 Clumbers in the U.S. with that number growing steadily. A large number of the owners of these Clumbers are members of the CSCA.

CSCA members around the country are now working to support local all-breed clubs with trophies in the Club’s name. In the past five years, Clumbers have been seen in the show ring more and more, and they have been winning Group Placements and Best in Shows.